Nationality:     at least three passport holders. Others must be permanent residents.

There is much more information the Members Area of the CupExperience CLUB - as you can tell from the Quick Navigation above.

The detailed info below is for CupExperience CLUB members only.

Racing will be in foiling 75 foot long monohulls sailed by a crew of 11, all of whom must meet a strict nationality requirement.

Updated 8 February 2020   - After months of debating various America's Cup Village layouts, Emirates Team New Zealand, the Auckland Council and the the New Zealand government agreed on a plan and confirmed in late March 2018 that Auckland will be the venue for the 2021 America's Cup. 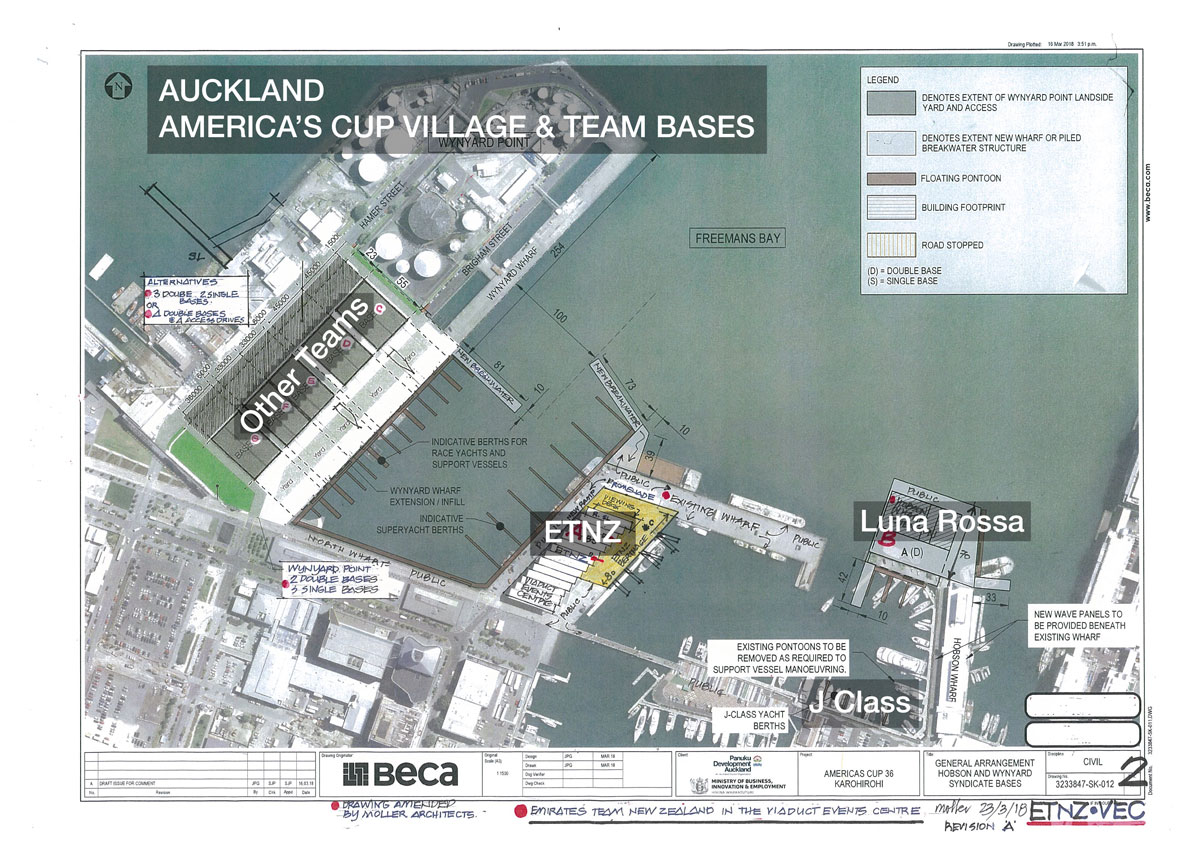 Updated 8 February 2020    Six challengers were accepted by Royal New Zealand Yacht Squadron, but three dropped out. Defender Emirates Team New Zealand reported that eight additional challenges were submitted before the close of the late entry period on 30 November 2018. Three of those were accepted but all have dropped out: Malta Altus Challenge, Stars & Stripes Team USA and DutchSail. The other five challenges never materialized. All of them had conditions that would require changes to the protocol, e.g. adding an America's Cup World Series event in their country.

As in 2013 in San Francisco, there are only three challengers. The difference this time is that all three have strong backing and should be competitive.

ETNZ represents the Royal New Zealand Yacht Squadron. RNZYS is the only club in America's Cup history to have lost the Cup and then won it back. ETNZ dominated Oracle in the 2017 America's Cup Match winning eight races. ETNZ won with better design and better sailing. They were helped by Oracle's self-inflicted errors including being OCS in Races 1 and 5 and a disastrous gybe in Race 2.

2017 helmsman Peter Burling raced around the world with Team Brunel in the Volvo Ocean Race, finishing third. Blair Tuke was also in the VOR with Spanish team Mapfre, and finished second. Tuke and Burling dominated the 49er class for four years leading up to their gold medal at Rio. Tuke was the primary operator of the foil controls from his cyclor station in ETNZ's dramatic win over Oracle in Bermuda in 2017.

To no one's surprise, the Circolo della Vela Sicilia became the Challenger of Record for the 2021 America's Cup represented by Luna Rossa. Also to no one's surprise they convinced ETNZ to move to monohulls. Having been a victim of America's Cup skullduggery leading to their withdrawal from the 2017 America's Cup, Luna Rossa negotiated a Protocol with ETNZ that reserves extensive powers for themselves as CoR and high visibility event naming rights for PRADA.

The New York Yacht Club returns to the America's Cup represented by team New York Yacht Club American Magic. They and INEOS Team UK are the only syndicates to have announced their submission of a formal challenge under the Protocol. They will have their primary base in Newport, Rhode Island. Team announcement.

Late Challenges - All have dropped out

Little information has been available since the challenge was announced on 7 December 2019.

Updated 8 February 2020    Long Beach Yacht Club, represented by Stars & Stripes Team USA, announced on 12 December 2019 that their challenge has been accepted by the Royal New Zealand Yacht Squadron. Stars+Stripes is led by Mike Buckley and former match racing world champion Taylor Canfield. Their plan was to mount an all-American challenge - both crew and designers. Canfield and Buckley met with Dennis Conner and got his blessing to use the name. Conner is not involved in the team.

Stars+Stripes bought a design package from Emirates Team New Zealand. Construction of their first AC75 began before the launch announcement. The yacht is being built by Composite Builders of Holland, Michigan.

Updated 8 February 2020   On the day the late entry period closed - 30 November 2018 - Royal New Zealand Yacht Squadron announced that they had received eight (!) additional challenges by the deadline. Five of them were not serious enough to be accepted, begging the question of why RNZYS announced them.  Three challenges were accepted in December: Malta Altus Challenge, Stars+Stripes Team USA and DutchSail. Malta and DutchSail withdrew. Stars+Stripes is still listed as a challenger but will not race in the April 2020 Cagliari AC World Series and will be disqualified under the Protocol rules.

Updated 5 February 2020 The America's Cup Match and the Prada Cup Challenger Selection Series will be one-on-one match racing. The racing format for America's Cup World Series and the Christmas Regatta will also be all match racing.

Match racing. The defender, Emirates Team New Zealand, is automatically in the Match and will face the winner of the Prada Cup Challenger Selection Series. The winner is the first to score seven points (one point per race win). The winner becomes the new defender.

Updated 5 February 2020 - Match racing. The Prada Cup finals will be first to seven points, with one point per race win.  The Challenger Selection Series will be organised by COR36 representing the Challenger of Record. Dates and competition format have not been announced but are likely to be:  Round Robin in January to eliminate one challenger. The remaining two challengers will sail a first-to-seven-points final in mid-February 2021.

Updated 5 February 2020  - The America's Cup World Series is organised by COR36 representing the Challenger of Record.

The ACWS originally was planned to begin in the second half of 2019. In late November 2018, one regatta was announced for October 2019 in Cagliari, site of Luna Rossa's base, but it was cancelled due to problems with the design of the "supplied equipment" foil arms. The original design failed structural tests and a new design wasn't  tested until late March 2019.

In 2020 there will be three ACWS regattas: Cagliari, Portsmouth and Auckland.

The Protocol anticipated several more challengers and would have awarded important advantages to challengers based on their ACWS results. With only three challengers, the AC World Series has been reduced to a series of three interesting exhibition events.

Once the AC World Series lost any value for the Prada Cup Challenger Selection Series, none of the challengers wanted this event, including Portsmouth-based INEOS Team UK. The Defender threatened to boycott the Cagliari event, and used that threat to negotiate a Protocol change, giving the Defender the right to organize the regatta and their title sponsor, Emirates, the naming rights.

Updated 8 February 2020 - Originally planned as a standalone event the Christmas Race has been combined with the Auckland AC World Series. All four competitors will race - the defender and the three challengers. The format has not been announced but will probably be match racing. The Christmas Regatta and the Auckland AC World Series will be organised by COR36 representing the Challenger of Record.

The Protocol sets out the rules for the 2021 America's Cup.

Starts, Smarts and Speed, from the September 2017 Seahorse Magazine.

If 2013 looked like "The Empire Strikes Back" with Larry Ellison as Darth Vader, 2017 brought Pete Burling as Luke Skywalker in "Return of the Kiwis." Emirates Team New Zealand dominated Oracle in the 2017 America's Cup Match with better designed foils, better control systems, and more efficient energy generation from their "cyclor" grinders. Oh, and they sailed better, too.

Lessons from America's Cup History for 2021

The AC75 foiling "monohulls" to be used in the 2021 America's Cup will accelerate the already rapid phase of modern race yacht technology that began in 1988. In the history of sailing, there have been three major technical advances that increased speed and the ability to point higher.

When the New York Yacht Club and the Royal Yacht Squadron resurrected the America's Cup after 31 years with no competition, they continued the tradition of racing displacement yachts with soft sails, albeit in much smaller yachts than had previously raced. While the ten America's Cup Matches sailed in 12 metre yachts are recalled with well-deserved affection and nostalgia, they were not close contests: During that era of "best of seven" competitions, the winners took 40 races, the losers only six. The only close score was Australia II's historic 4-3 victory over Liberty to wrest the Cup from the New York Yacht Club after 132 years.

1987 - Australia Fails to Defend in Perth

The Royal Perth Yacht Club tried to follow the example of the New York Yacht Club, holding defender trials. This led to four Australian syndicates battling each other for the right to defend, and competing with their yacht club for sponsorship money. With money and effort diluted in the defender trials, Kookaburra III was defeated 4-0 by San Diego Yacht Club's Stars and Stripes 87.  When Team New Zealand won the Cup in San Diego in 1995, the RNZYS declared that there would be no defender trials. After 1995, every defender followed this practice of concentrating resources on a single defender team.

Michael Fay of New Zealand caught  Dennis Conner's Sail America Foundation and the San Diego Yacht Club by surprise when he challenged in a 90 foot monohull. Telling the SDYC to "read the deed," he was completely in his rights not to wait for SDYC to sort out how, when and where they wanted to hold the next defense. But he did not read the Deed of Gift carefully enough himself, since the DoG gives the holder of the Cup the right to defend in "... any one yacht or vessel..."  and SDYC came with the first ever catamaran to race in an America's Cup Match. Stars and Stripes had a hard wing sail with the same basic design that Oracle would use in 22 years later in their grudge match against Alinghi.

When Sir Peter Blake left Team New Zealand, so did other team members - several to the One World syndicate in Seattle and the heart of the sailing team to Alinghi in Switzerland. The tycoons of the early twentieth century manned their giant yachts with crews of Scandinavian fishermen. But now tycoons began recruiting internationally for the afterguard and other key roles on board.

We could well see floating monohulls again some day, but for now the 2007 America's Cup will mark the end of the floating monohull era. Alinghi mounted a masterful campaign to defend the Cup against ETNZ, winning 5-2. With crews of 16, lead keel bulbs weighing 20 tons and spinnakers the size of a tennis court, the "America's Cup Class" yachts continued the style of match racing that devotees of the 12 meter yachts enjoy.

The 1988 Deed of Gift match showed that the only winning strategy was to build the fastest boat allowed by the deed. That meant multihulls - a trimaran for Larry Ellison's Oracle Racing of Golden Gate Yacht Club and a catamaran for Ernesto Bertarelli's Alinghi of the Société Nautique de Genève. Both yachts were 90 feet on the waterline and over 100 feet overall. Oracle's giant wing sail was the difference - the Swiss yacht was simply overpowered.

The AC72 Class Rule prohibited movable control surfaces on the foils, but ETNZ figured out how to control angle of attack and lift, by raking cleverly shaped foils fore and aft. Sadly for ETNZ, Oracle caught up in the design battle and Oracle's international sailors mastered how to race their boat after first falling behind 1-8 in the duel on San Francisco Bay

ETNZ played the lone wolf and won, dominating Oracle by winning eight races to Oracle's one. They refused to join the other five teams in the "Framework Agreement." They thought outside the box, committed early to "cyclors" instead of grinders, and kept it secret until it was too late for the other teams to respond. They were the last team to arrive in Bermuda. They were still developing their boat and learning to sail it. Their strategy paid off!